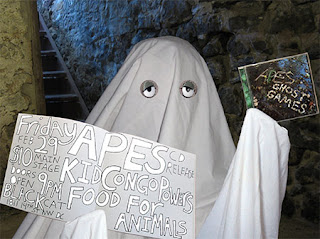 Join the Apes, Kid Congo Powers, Food for Animals and a bunch of lovelies for a night of music and funnnnnn!! This evening will also boast an electrifying electronic dance set by the inimitable New York Night Train artist KID CONGO POWERS of The Cramps/Gun Club/Nick Cave and TheBad Seeds fame – a consummate entertainer and legendary musician who should require no introduction. Joining him on Bass will be none other than Arthur Noll from Yell County! Stepping away, momentarily, from his usual rock band setup , solo cholo Kid will be man and machines...beats and noise.. stories and static...Okay, and bass and a guitar!.............February, 29 2008 at Black Cat Not Available , D.C., Washington DC Cost : $10 Record release party w/ Kid Congo Powers/ Food for Animals
Posted by Kid Congo Powers at Tuesday, February 26, 2008 1 comment: