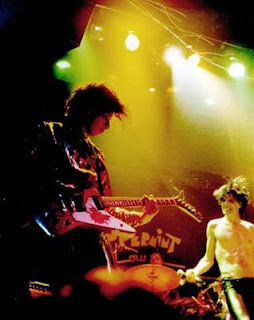 LUX INTERIOR
It didnt take more than one look at a photograph of Lux Interior in 1976 to
realize he was a special creature. It didnt take more than witnessing one song of The
Cramps live to realize Lux burned with an uncontainable wildfire within. He was
sexy,funny,and dangerous all at the same time. The rockabilly howler, the
psychedelic seer, the latex and high heels pervert, the late night horror host,
the most exhalted potentate of love,the king of rock and roll. Lux was all
these things and so much more. He possesed the uncanny talent for zeroing in on the absolute
essence and beauty of the wild and weird, be it in records,films,books,photgraphy
or art from all eras past, especially those looking way into the future. His
findings have influenced hundreds of thousands, if not millions. Certainly it
has been stamped on me as a fan and as the guitarist for the Cramps from my
ages of 21 to 23, and continue in my works today.
The last times I saw Lux was in 2006 at one of their last shows in NYC. It
was the best show I had been to in years. The band was cooking and Lux was
brilliantly deranged and hilarious. During the always chaotic rendition of
"Surfin Bird" Lux climbed on the stacked drum monitors, peeking out of a slit in the
long black velvet curtains so that all you saw was his bleached blond head
glowing beautiful and grotesque, I saw the always cool Poison Ivy look up and
start laughing with appreciation and love. At that moment I was incredibly touched and so
thankful for The Cramps. It had been years since I had met up with the band and
backstage Lux kept hugging and kissing me. I was so happy to see them again. A
few months later my band, The Pink Monkey Birds played in Los Angeles and Lux
and Ivy attended and praised the show. Lux was a bit tipsy and very kissy again and
full of love. My sister Barbara was selling our merch and Lux ran behind the
table to greet her after not seeing her for 25 years.What a sweetheart. I remember Lux as glowing.
He commented to me that some of my stage patter could have come from his mouth.
I didnt hesitate to blurt out "I have learned from the best." Lux laughed and
gave me another big hug. That was the last time I saw him. I am honored to have
known the amazing and magical Lux Interior. We miss him already.
Posted by Kid Congo Powers at Monday, February 09, 2009 6 comments: