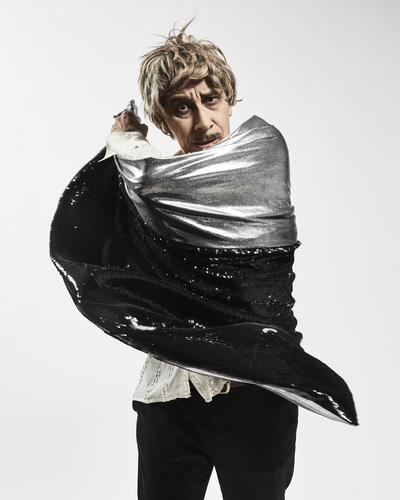 Photo: Luz Gallardo
Guitar slinger and singer, the legendary Kid Congo Powers (The Gun Club, The Cramps, Nick Cave & The Bad Seeds), bassist Kiki Solis (Baby Baby Dance With Me, Knife in The Water, Rhythm of Black Lines), drummer Ron Miller (Switch Hitter, Up The Academy) and Chicano guitarist Mark Cisneros (The Make-Up, Medications, Des Demonas) head back out on the road next month, playng select dates with Mudhoney. The band also just announced two shows with Slim Cessna's Auto Club in Denver on December 30th and 31st.
'Dracula Boots' is available on limited edition red vinyl for the 10th anniversary of its release via In The Red Records.
LIVE SHOWS:
10/14 St. Louis MO Off Broadway Night Club ^^
10/15 Detroit MI El Club  ^^
10/16 Cleveland OH Grog Shop ^^
10/17 Pittsburgh PA Mr. Smalls Theater ^^
10/18 Baltimore MD Baltimore Soundstage ^^
10/19 Ridgewood NY Market Hotel ^^
12/30 & 31 Denver CO Hi-Dive **
^^ with Mudhoney
**with Slim Cessna's Auto Club
Listen to Kid on Episode 222 of Turned Out A Punk
Read 'The Singular Fashion Sense Of Kid Congo Powers' on Vogue.com
Read Kid's article on 'How I Came Out Of The Closet And Into The Street' on Huffington Post
Read the interview with Kid on life with The Cramps, The Gun Club and Nick Cave on Dangerous Minds
"Depending on your psychic sensitivity, you might remember feeling a sudden blip in temperature the day Kid Congo Powers left Washington, instantly making our city a little less cool."  Washington Post

"For fans of timelessly scuzzy garage rock, Kid Congo and the Pink Monkey Birds are as good as it gets." Exclaim

"...they are ALWAYS such a good goddamn time. At this point in the game, Powers should be considered a rock-and-roll godhead." The Stranger
“There are few figures in rock that have the impressive resume Kid Congo has....a singular presence in every important scene …” Noisey
"Kid Congo's career is one for the (music) history books." Westword
"For as much as Powers' legend has been cemented in punk's history books, he's not out to promote a nostalgia trip; instead, he's interested in sharing new music. His current group, the Pink Monkey Birds, is still somewhat informed by the spirit of the early punk scene in which Powers came of age...he can't get over how cool it is when people come up to him after one of his live sets to tell him how important his music has been to them." OC Weekly
"...a true veteran of the garage rock game, proving that such raucous fun can never die – at least in the hands of a master!" KCRW
Official site
Facebook
In The Red Records
For press inquiries: Jo.Murray@gmail.com
Posted by Kid Congo Powers at Tuesday, September 17, 2019 1 comment: